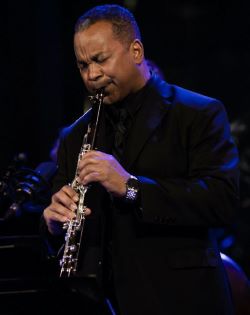 Victor Goines is a native of New Orleans, Louisiana. He has been a member of the Jazz at Lincoln Center Orchestra and the Wynton Marsalis Septet since 1993, touring throughout the world and recording more than 20 albums. As a leader, Goines has recorded ten albums including his most recent release A Dance At The Mardi Gras Ball (2016) on Rosemary Joseph Records. A gifted composer, Goines has more than 50 original works to his credit. He has recorded and/or performed with many noted jazz and popular artists including Ahmad Jamal, Ruth Brown, Dee Dee Bridgewater, Ray Charles, Bob Dylan, Dizzy Gillespie, Lenny Kravitz, Branford Marsalis, Ellis Marsalis, Dianne Reeves, Willie Nelson, Marcus Roberts, Diana Ross, Stevie Wonder, and a host of others. Currently, he is the director of jazz studies/professor of music at Northwestern University. He received a bachelor of music degree from Loyola University in New Orleans in 1984, and a master of music degree from Virginia Commonwealth University in Richmond in 1990.