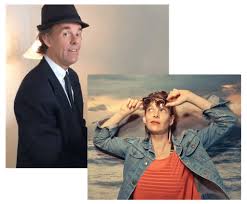 Tom McDermott & Aurora Nealand have been playing as a duet steadily for over 10 years now. They’ve recorded two albums together; their first, “City of Timbres,” received a four-star review in Downbeat Magazine.

Their live shows are a mix of tag, trad jazz, swing, Brazilian choro, and 60s pop music. Join us for their Snug Harbor debut as a duet!
Tom McDermott is one of New Orleans’ premiere piano players and composers. He grew up in St. Louis, where he earned a Masters’ Degree in Music, wrote music journalism for the morning paper, and soaked up the sounds of ragtime and traditional jazz that flourished there in the 1960s and 70s. In 1984, spurred by his love of James Booker, Professor Longhair and Dr. John, he moved to New Orleans. Since then, Tom has toured all over Europe, Asia, South America and all over the States (including Carnegie Hall) with the Dukes of Dixieland.
An established bandleader, composer, performer and improviser, Aurora Nealand has become a prominent force in the New Orleans music scene since she first arrived in 2004. Combining the “formal education” – a music composition degree from Oberlin Conservatory and training at the Jacques Lecoq School of Physical Theatre in Paris – with the “informal” experience of playing music in the streets and clubs of New Orleans and throughout the northern Hemisphere, Nealand has emerged as an innovative, sensitive and daring music creator and performer.
She is most recognized for her performance on saxophones, clarinet and vocals and has been at the forefront of the revival of New Orleans Traditional Jazz amongst the younger generation of the city’s musicians. After playing and learning as a sideman in established New Orleans Bands for several years, (Panorama Jazz Band, VaVaVoom, The New Orleans Moonshiners), in 2010 she formed her own Traditional Jazz band “The Royal Roses”. The Royal Roses released it’s first album, “A Tribute to Sydney Bechet: Live at Preservation Hall” to national acclaim and Nealand was voted as one of Downbeat Magazines top ten rising stars for soprano saxophone in 2010.
Shows at 8pm & 10pm.
Doors at 7:00pm & 9:30pm.
Restaurant Open 6pm – 10pm for dinner before or after your showtime.
Advance ticket-holders can make table reservations for dinner by Emailing info@snugjazz.com or calling the club at 504-949-0696 between 2pm – 8pm, after tickets have been purchased online. Full Bar Open 6pm – Midnight.
*PLEASE NOTE*
All performances are sold at half the normal audience capacity, creating an even more intimate listening experience. Covid mandates will be honored with masks required for all and seating more distanced than our usual. Please be prepared to present a valid proof of Covid vaccination or negative PCR test dated within the past 3 days with matching Photo ID for entry. No ticket refunds due to lack of Covid prevention preparation. With the limited seating capacity, it is advised that you get your tickets early!