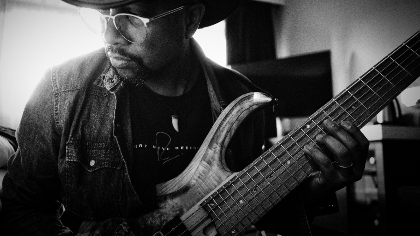 Roland Guerin returns with his first concert in over two years, presenting the debut of his brand new project PROG:FUNK, merging progressive music styles with melodies, rhythms and storytelling techniques rooted in and born from the legends of Louisiana.

Drawing from a wide spectrum of genres, including American folk, blues, zydeco, rock and jazz, Guerin creates a singular style at the heart of which are stories told through multi-layered melodies, rhythms and expressive lyrics in the range of Steely Dan, Sting and Peter Gabriel.
Having learned first-hand from greats such as Allen Toussaint, Dr John, Alvin Batiste and others, Guerin has created a new musical experience with PROG/FUNK. One that involves deep history in storytelling, melodies, and grooves, that are inviting and magical.
Tonight, the Roland Guerin Band presents PROG:FUNK, featuring:
Roland Guerin – bass, vocals
John Jones – drums
John Maestas – guitar
Kyle Roussel – piano, keyboards
Sam Taylor – saxophone, keys
Ashlin Parker – trumpet
Raised in a musical family – his father a great lover of jazz and classical music his mother, a blues and zydeco bass player – Roland Guerin began playing bass at the age of 11. Throughout his formative years, Guerin was strongly influenced by pop, rock and R&B music of the 70s and 80s. Bands and artists such as Cameo, Dazz Band, Rush, the Brothers Johnson, Gerry Rafferty, America, and Booker T & The MG’s seeded his love for great songs and inspired him to write music of his own.
While studying Marketing at Southern University in Baton Rouge, Guerin joined legendary jazz educator Alvin Batiste’s band, The Jazztronauts. Having inherited much of Batiste’s musical innovations and concepts, Guerin developed ways to bring his own musical voice to life. The jazz genre became his avenue toward success. Over the course of his career, Guerin toured and performed with legendary musicians, such as George Benson, Allen Toussaint, Dr. John, John Scofield, Ellis Marsalis, Marcus Roberts, and more.
He also participated in the recording of numerous albums, including The Blind Boys of Alabama’s Grammy Award winning album “Down in New Orleans,” Marcus Roberts’s Grammy Award nominated recording of George Gershwin’s classic “Rhapsody in Blue,” and Allen Toussaint’s album “Connected.”  As a member of the Marcus Roberts Trio from 1994 to 2009, Guerin performed at the head of symphony orchestras across the world.
In 1998, Guerin released his first album, “The Winds of the New Land”, featuring Peter Martin on piano, Nicholas Payton on trumpet, Donald Edwards on drums, and Mark Whitfield on guitar. The record was acclaimed for its innovative style of composition and arrangement. JazzReview called it “a literal piece of art,” while the New Orleans Magazine named Guerin a “Contemporary Jazz All-Star.” He followed up with an album from the Roland Guerin Sextet, “Live at the Blue Note.” Over the following decade, Guerin released 4 more successful albums, and performed with his own band at major venues and festivals worldwide, such as the Blue Note in Tokyo and the New Orleans Jazz & Heritage Festival.
Guerin joined the Allen Toussaint band in 2008, touring and performing with Toussaint until his passing in 2015. Soon thereafter, Guerin joined the band of legendary Dr. John, becoming his last Musical Director, before Mac passed in 2019.
Shows at 8pm & 10pm.
Doors at 7:00pm & 9:30pm.
This premiere show is an official concert of the Fall 2022 NOLAxNOLA citywide music festival!
Restaurant is Open 6pm – 10pm for dinner before or after your showtime:
Advance Ticket Holders can now automatically make dinner table reservations in the Dining Room online via Open Table here!
Advance Ticket-Holders can also make table reservations for dinner by Emailing info@snugjazz.com after your tickets have been purchased online. All dinner table reservations must be attached to advance concert tickets. Dinner Service without advance concert tickets is first-come, first-served based on availability upon arrival.
Full Bar is Open 6pm – Midnight for all, on show nights, with or without tickets.
Kind Reminder:  Snug Harbor does not serve food inside the Music Room. In order to preserve the integrity, quiet and focus of our world class intimate concerts, only cocktails and soft drinks are available for table service inside the Music Room. However, we encourage you to arrive 90 Minutes prior to your showtime in order to enjoy full, relaxing dinner service in the Dining Room right next door, before getting seated in the Music Room for the show. 8pm ticket holders can also enjoy dinner, dessert or appetizers after the show, with Dining Room seating only guaranteed by submitting your table request before 8pm.
*PLEASE NOTE*
As announced by the City of New Orleans, as of March 24th, Snug Harbor is no longer requiring valid proof of Covid vaccination or negative test for entry, and while masks are still suggested when not actively eating or drinking indoors, they are now optional for all. We are now seating at just under our regular audience capacity.
However, with our intimate venue’s regularly limited seating capacity, advance tickets are still strongly suggested in order to guarantee seats for this acclaimed show!