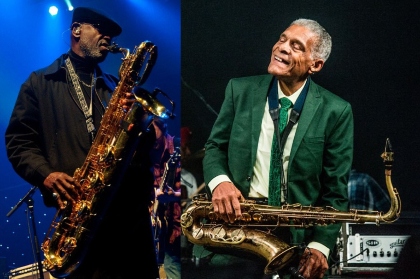 Two of New Orleans’ most distinguished reedsmen come together to present one unforgettable show with an all-star band, a rare treat combining nearly a century of musicianship and incomparable energy:

From the first time he picked up a saxophone, Roger Lewis began betting on a career as a musician. Reading his family’s encyclopedia, he was drawn to pictures of landmarks from around the world. Music, he decided, was going to take him places. The now 80 year old New Orleans native has been playing this kind of music since he was 7.
As a founding member of the Dirty Dozen Brass Band, formed in 1977, Lewis has spent decades seeing the world while on tour. Contrary to what the name suggests, The Dirty Dozen Brass Band has seven members, and Lewis is the only original member after many lineup changes through the years. “I’m the glue,” he says. And he’s stuck around because of his love for music. The Dozen have recorded songs with stars such as Elvis Costello, DJ Logic and Norah Jones, and have toured with The Black Crowes and opened up for Miles Davis. When the band played an NPR Tiny Desk Concert, the series founder, Bob Boilen, described them as “an abundance of euphoria.”
Almost unbelievably, Lewis released his first solo album just this summer, at the age of 80.  2022’s “Alright!” is the debut album for Roger Lewis, a musician who has had a long history in New Orleans as well as an indelible effect on the jazz scene in the city. In addition to co-founding the Dirty Dozen Brass Band, he also became a member of the Tremé Brass Band, Delfeayo Marsalis’ Uptown Jazz Orchestra, and many other groups.
Clarinetist, saxophonist, and flutist Charlie Gabriel is a fourth-generation jazz musician from New Orleans. Raised in a large, classically trained musical family that emigrated from Santo Domingo, Dominican Republic to New Orleans, Louisiana in the 1850s, Gabriel began playing clarinet professionally with the Eureka Brass Band when he was 11 years old. During World War II, his father, clarinetist and drummer Martin Manuel “Manny” Gabriel often sent his son as a substitute on gigs.
When his family moved to Detroit in the 1940s, Charlie was already so experienced musically that he was asked to join the Lionel Hampton band at age 16. After a decade influencing the hard-bop movement of the 1950s and early 1960s in Detroit with close friend, trumpeter Marcus Belgrave who was a session player with Motown Records, Charlie played in the Aretha Franklin Orchestra and dabbled with his peers from the afrocentric independent spiritual free jazz collective at Tribe Records, led by Belgrave, during the 1970s.
After recording a small string of records and many years touring nationally and globally with artists such as Nancy Wilson and J.C. Heard, on the precipice of his retirement, the historic Preservation Hall offered Charlie the opportunity to move back to New Orleans and around 2012, he had fully relocated back to the Crescent City, full time with the Preservation Hall Jazz Band ever since. At 90 years young, Charlie released only his second album as a bandleader, aptly entitled “89,” just this past year, with another LP, this time of all original compositions, due out in 2023.
Tonight, Roger Lewis & Charlie Gabriel present The Distinguished Gentlemen, featuring:
Roger Lewis – baritone saxophone
Charlie Gabriel – tenor saxophone
Richard Knox – piano
Chris Severin – bass
Herman LeBeaux – drums
Shows at 8pm & 10pm.
Doors at 7:00pm & 9:30pm.
This One-Night-Only show here at Snug is an official concert of the Fall 2022 NOLAxNOLA citywide music festival!  Get your tickets early, not to be missed!
Restaurant is Open 6pm – 10pm for dinner before or after your showtime:
Advance Ticket Holders can now automatically make dinner table reservations in the Dining Room online via Open Table here!
Advance Ticket-Holders can also make table reservations for dinner by Emailing info@snugjazz.com after your tickets have been purchased online. All dinner table reservations must be attached to advance concert tickets. Dinner Service without Advance Concert Tickets is first-come, first-served based on availability upon arrival.
Full Bar is Open 6pm – Midnight for all, on show nights, with or without tickets.
Kind Reminder:  Snug Harbor does not serve food inside the Music Room. In order to preserve the integrity, quiet and focus of our world class intimate concerts, only cocktails and soft drinks are available for table service inside the Music Room. However, we encourage you to arrive 90 Minutes prior to your showtime in order to enjoy full, relaxing dinner service in the Dining Room right next door, before getting seated in the Music Room for the show. 8pm ticket holders can also enjoy dinner, dessert or appetizers after the show, with Dining Room seating only guaranteed by submitting your table request before 8pm.
*PLEASE NOTE*
As announced by the City of New Orleans, as of March 24th, Snug Harbor is no longer requiring valid proof of Covid vaccination or negative test for entry, and while masks are still suggested when not actively eating or drinking indoors, they are now optional for all. We are now seating at just under our regular audience capacity.
However, with our intimate venue’s regularly limited seating capacity, advance tickets are still strongly suggested in order to guarantee seats for this acclaimed show!