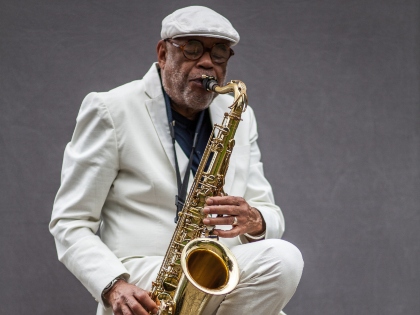 He was inspired to study saxophone at age 10, after seeing Ray Charles play alto sax at Lincoln Beach Amusement Park, where Fats Domino also performed during Reggie’s childhood. Years later, Reggie would share the stage with both musical giants, and spend 22 years as a member of Fats Domino’s band, before moving to Portland, Oregon in 2004.
Over the past 15 years in Portland, he would prepare Oregon high school music students to win 1st place at the prestigious 2015 National Lincoln Center Essentially Ellington Competition as a cherished music educator, in addition to performing with the Portland symphony orchestra and historic opera, as well as serving on Portland’s Regional Arts & Culture Council Music Panel.
Reggie is truly born of the heartbeat of New Orleans jazz and the foundations of American music in general, having performed as a core member in the bands of Fats Domino, Professor Longhair, Dave Bartholomew, Irma Thomas, Maria Muldaur, Dr. John, Jerry Lee Lewis, Charmaine Neville, the Neville Brothers and members of The Meters, among many others. You may have heard him on three of Peter Gabriel’s albums, or on recordings by The Neville Brothers, The Indigo Girls, Joan Osborne, Bruce Hornsby, and more.
Reggie’s devotion to his craft, and to sharing his deep knowledge of Louisiana’s history, musicians, and musical genres, stems from a time-honored New Orleans tradition of arts education. Nurtured by his teachers—musical giants like Edward “Kidd” Jordan, Johnny Fernandez, Danny Barker, and Alvin Batiste—the latter of whom learned at the knee of legendary musician Sidney Bechet, referred to by Duke Ellington as “the very epitome of jazz,” Reggie has now picked up the mantle to pass that knowledge on to future generations of musicians.
When funk first developed, exploding onto the scene, Reggie was there—not as an observer, but as a 13 year old musician playing his first professional gigs with legendary keyboardist David Batiste Sr. and The Gladiators, widely accepted as one of the preeminent and pioneering bands of funk.
Reggie knows the music. It is in his blood. He can trace the many, varied styles and influences of southeast Louisiana music all the way back to pre-colonial Africa. It is this knowledge, coupled with the strong arts education tradition of his hometown that gave rise to Reggie’s newest project, “Anonymous Legends: A History of New Orleans Music” — the culmination of Reggie’s life’s work.
Join us tonight for an evening with Reggie Houston and his New Orleans Trio, while he’s home!
The Reggie Houston New Orleans Trio tonight features:
Reggie Houston – saxophones
Amasa Miller – piano
Glen Andrews – drums
Shows at 8pm & 10pm
Doors at 7:00pm & 9:30pm.
Restaurant is Open 6pm – 10pm for dinner before or after your showtime:
Advance Ticket Holders can now automatically make dinner table reservations for the Dining Room online via Open Table here!
Advance Ticket-Holders can also make table reservations for dinner by Emailing info@snugjazz.com after your tickets have been purchased online. All dinner table reservations must be attached to advance concert tickets. Dinner Service without Advance Concert Tickets is first-come, first-served based on availability upon arrival.
Full Bar is Open 6pm – Midnight for all, on show nights, with or without tickets.
Kind Reminder:  Snug Harbor does not serve food inside the Music Room. In order to preserve the integrity, quiet and focus of our world class intimate concerts, only cocktails and soft drinks are available for table service inside the Music Room. However, we encourage you to arrive 90 Minutes prior to your showtime in order to enjoy full, relaxing dinner service in the Dining Room right next door, before getting seated in the Music Room for the show. 9pm ticket holders can also enjoy dinner, dessert or appetizers after the show, with Dining Room seating only guaranteed by submitting your table request before 8pm.
*PLEASE NOTE*
As announced by the City of New Orleans, as of March 24th, Snug Harbor is no longer requiring valid proof of Covid vaccination or negative test for entry, and while masks are still suggested while not eating or drinking indoors, they are now optional for all. We are now seating at just under our regular audience capacity.
However, with our intimate venue’s regularly limited seating capacity, advance tickets are still strongly suggested in order to guarantee seats for this acclaimed show!