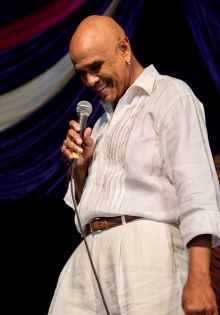 Influenced greatly by Ella Fitzgerald, Phillip Manuel is a gifted jazz vocalist with a poised, polished and gracefully lithe voice. Manuel’s rich baritone has been heard in many contexts over the last thirty years, from jingles and commercials to tours with Terence Blanchard and Bill Summers.

From New York to Los Angeles, from Portugal to Paris, Manuel has graced the world’s stages with some of the biggest stars in jazz. Encouraged by Aaron Neville to take the leap for his first live performance as a youth, his voice has been described as dramatic, warm and full of soul. Some say his voice charms and seduces, and his range sounds effortless. His most recent album, 2019’s “PM,” finds him at his soulful R&B best, performing 12 original compositions—a marked departure from his other jazz recordings. While his musical abilities are obvious, Phillip is also an accomplished actor, writer and sought-after voiceover talent, including roles in classic New Orleans films such as “Cane River” and “The Big Uneasy.”
The Phillip Manuel Quartet tonight features:
Phillip Manuel – vocals
David Torkanowsky – piano
Jason Stewart – bass
Tanner Guss – drums
Shows at 8pm & 10pm.
Doors at 7:00pm & 9:30pm.
Restaurant is Open 6pm – 10pm for dinner before or after your showtime.
Advance Ticket-Holders can also make table reservations for dinner by Emailing info@snugjazz.com or calling the club at 504-949-0696 between 2pm – 8pm, after your tickets have been purchased online.
Full Bar Open 6pm – Midnight for all, on show nights, with or without tickets.
Kind Reminder:  Snug Harbor does not serve food inside the Music Room. In order to preserve the integrity, quiet and focus of our world class intimate concerts, only cocktails and soft drinks are available for table service inside the Music Room. However, we encourage you to arrive 90 Minutes prior to your showtime in order to enjoy full, relaxing dinner service in the Dining Room right next door, before getting seated in the Music Room for the show. 8pm ticket holders can also enjoy dinner, dessert or appetizers after the show, with Dining Room seating only guaranteed by submitting your table request before 8pm.
*PLEASE NOTE*
As announced by the City of New Orleans, as of March 24th, Snug Harbor is no longer requiring valid proof of Covid vaccination or negative test for entry, and while masks are suggested when not actively eating or drinking indoors, they are now optional for all.
However, with our intimate venue’s limited seating capacity, advance tickets are still strongly suggested.
+ Google Calendar+ Add to iCalendar