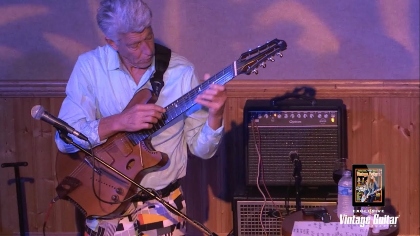 New Orleans guitarist Phil DeGruy‘s delightful fusing of creative energy, radical genius and impeccable craft has yielded much acclaim from contemporaries, not considered your usual guitarist. First of all, he considers himself to be a guitarpist, playing a unique custom-built instrument that combines a traditional electric guitar with an electric harp.

Not only is he a respected guitar (and guitarp) wizard who’s collaborated with other master guitarists in New Orleans (Cranston Clements, Jimmy Robinson, John Rankin), he’s got a crazy wit and a flair for entertaining his audience that also has bolstered his career as a solo player.
Upon hearing Phil, late guitar phenom Danny Gatton opined, “I have never been more impressed with anybody’s playing, ever!” And the late jazz-rock influencer of the 1960s-70s, Larry Coryell described him as the “most original solo guitarist of the 90s.”
Influenced largely by Chet Atkins, George Benson, Hank Mackie and Lenny Breau, Phil dove deep into the guitar immediately following high school and by his mid-20s was performing in Nashville with Lenny and Chet, two of his idols. His self-produced 2018 release, Mask And You Shall deCeive, is his first record in 14 years, took years to compose he says, and is his third studio album since his 1995 breakout for NYC Records.
Tonight, DeGruy presents a recent collective he and three of his longtime comrades in sonic experimentation are calling Funky Pox, featuring:
Phil DeGruy – guitarp
Cranston Clements – guitar
James Singleton – bass
Doug Belote – drums
Shows at 8pm & 10pm.
Doors at 7:00pm & 9:30pm.
This rare, limited edition show from this collective here at Snug is an official concert of the Fall 2022 NOLAxNOLA citywide music festival!
Restaurant is Open 6pm – 10pm for dinner before or after your showtime:
Advance Ticket Holders can now automatically make dinner table reservations in the Dining Room online via Open Table here!
Advance Ticket-Holders can also make table reservations for dinner by Emailing info@snugjazz.com after your tickets have been purchased online. All dinner table reservations must be attached to advance concert tickets. Dinner Service without Advance Concert Tickets is first-come, first-served based on availability upon arrival.
Full Bar is Open 6pm – Midnight for all, on show nights, with or without tickets.
Kind Reminder:  Snug Harbor does not serve food inside the Music Room. In order to preserve the integrity, quiet and focus of our world class intimate concerts, only cocktails and soft drinks are available for table service inside the Music Room. However, we encourage you to arrive 90 Minutes prior to your showtime in order to enjoy full, relaxing dinner service in the Dining Room right next door, before getting seated in the Music Room for the show. 8pm ticket holders can also enjoy dinner, dessert or appetizers after the show, with Dining Room seating only guaranteed by submitting your table request before 8pm.
*PLEASE NOTE*
As announced by the City of New Orleans, as of March 24th, Snug Harbor is no longer requiring valid proof of Covid vaccination or negative test for entry, and while masks are still suggested when not actively eating or drinking indoors, they are now optional for all. We are now seating at just under our regular audience capacity.
However, with our intimate venue’s regularly limited seating capacity, advance tickets are still strongly suggested in order to guarantee seats for this show.