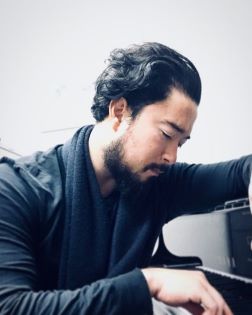 Join us tonight for Oscar’s final solo concert of 2022, and one of his last performances of the season!

A native of Honduras, Oscar Rossignoli is an accomplished pianist and composer in both jazz and classical music, based in New Orleans since 2015. He began studying classical music when he was six years old and discovered jazz in high school, when he immediately began writing and performing his own compositions.

Upon enrolling at the University of New Orleans (UNO) music department where he earned his Masters, Rossignoli became an in-demand player in New Orleans, performing with Jason Marsalis, Bill Summers, Christian Chief aTunde Adjuah Scott, James Singleton, Brian Seeger, Brad Walker and others. He was named the 2015-2016 ASCAP Louis Armstrong Scholar at UNO by the New York-based ASCAP Foundation, and was also recognized as a finalist for the Ellis Marsalis International Jazz Piano Summer 2018 Competition, a contest meant to be the most comprehensive, challenging, and in-depth jazz piano competition in the world.
Rossignoli folds many traditions into his music, from his classical music formation to his passion for Latin and North American jazz. Currently based in New Orleans, he regularly works with some of the city’s best jazz musicians. He has also established his reputation in various settings and bands, including the EXTENDED trio with Matt Booth and Brad Webb, and by leading his own quartet. He collaborates on a wide range of projects with artists such as John Boutté, Jason Marsalis, Joe Dyson, Dee Dee Bridgewater, Alexey Marti, among many others.
His latest self-released album, “Inertia,” marks his first full-length solo piano project. Recorded mostly during the 2020-2021 pandemic and released in late 2021, the record showcases his long relationship with his instrument of choice, as well as his process of discovery through improvisation. Tracks range from original compositions to improvisations and include a nod to Chopin and a tribute to the late great Chick Corea.
Tonight, he presents one of his lauded solo piano concerts, where you might hear everything from Thelonious Monk to Chopin, and his own originals.
Shows at 8pm & 10pm.
Doors at 7:00pm & 9:30pm.
Restaurant is Open 6pm – 10pm for dinner before or after your showtime:
Advance Ticket Holders can now automatically make dinner table reservations for the Dining Room online via OpenTable.com here !
Advance Ticket-Holders can also make table reservations for dinner by Emailing info@snugjazz.com after your tickets have been purchased online. All dinner table reservations must be attached to advance concert tickets. Dinner Service without Advance Concert Tickets is first-come, first-served based on availability upon arrival.
Full Bar is Open 6pm – Midnight for all, on show nights, with or without tickets.
Kind Reminder:  Snug Harbor does not serve food inside the Music Room. In order to preserve the integrity, quiet and focus of our world class intimate concerts, only cocktails and soft drinks are available for table service inside the Music Room. However, we encourage you to arrive 90 Minutes prior to your showtime in order to enjoy full, relaxing dinner service in the Dining Room right next door, before getting seated in the Music Room for the show. 8pm ticket holders can also enjoy dinner, dessert or appetizers after the show, with Dining Room seating only guaranteed by submitting your table request before 8pm.
*PLEASE NOTE*
As announced by the City of New Orleans, as of March 24th, Snug Harbor is no longer requiring valid proof of Covid vaccination or negative test for entry, and while masks are still suggested when not actively eating or drinking indoors, they are now optional for all. We are also now seating at just under our regular audience capacity.
However, with our intimate venue’s regularly limited seating capacity, advance tickets are still strongly suggested in order to guarantee seats for this show.