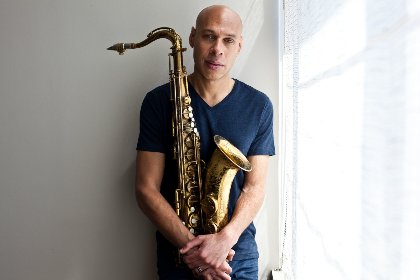 Joshua Redman is one of the most acclaimed and charismatic jazz artists to have emerged in the decade of the 1990s. Born in Berkeley, California, he is the son of legendary saxophonist Dewey Redman and dancer Renee Shedroff. He was exposed at an early age to a variety of musics (jazz, classical, rock, soul, Indian, Indonesian, Middle-Eastern, African) and instruments (recorder, piano, guitar, gatham, gamelan), and began playing clarinet at age nine before switching to what became his primary instrument, the tenor saxophone, one year later. The early influences of John Coltrane, Ornette Coleman, Cannonball Adderley and his father, Dewey Redman, as well as The Beatles, Aretha Franklin, the Temptations, Earth, Wind and Fire, Prince, The Police and Led Zeppelin drew Joshua more deeply into music.

With over two dozen albums as either a bandleader or co-leader from 1993 to date, several of these earning Grammy Award nominations, Redman runs sidesaddle with frequent collaborators and renowned artists such as Pat Metheny, Brian Blade, Christian McBride, Brad Mehldau, and more. Notably, from 2000 – 2007 he was the Artistic Director of SF JAZZ, and co-founder of the SF JAZZ Collective.
Stylistically, Redman is known for literally and figuratively stretching the shape of the trio format approach, including his audacious configuration of his piano-less “double-trio” comprised of two players each on drums, bass, and saxophones. Most recently, he’s reunited with his original quartet; Brad Mehldau on piano, Christian McBride on bass, and Brian Blade on drums to release 2020’s “RoundAgain” – the group’s first recording since 1994. Reportedly, Redman is currently working on a new album with players both new and old in 2022.
Tonight, Redman presents a surprise ensemble that you want to be sure not to miss in our intimate listening room.
Shows at 8pm & 10pm.
Doors at 7:00pm & 9:30pm.
Restaurant is Open 6pm – 10pm for dinner before or after your showtime.
Advance Ticket-Holders can also make table reservations for dinner by Emailing info@snugjazz.com or calling the club at 504-949-0696 between 2pm – 8pm, Thurs-Sun, after your tickets have been purchased online. All dinner table reservations must be attached to advance concert tickets. Dinner Service without Advance Concert Tickets is first-come, first-served based on availability upon arrival. Full Bar is Open 6pm – Midnight for all on show nights, with or without tickets.
Kind Reminder:  Snug Harbor does not serve food inside the Music Room. In order to preserve the integrity, quiet and focus of our world class intimate concerts, only cocktails and soft drinks are available for table service inside the Music Room. However, we encourage you to arrive 90 Minutes prior to your showtime in order to enjoy full, relaxing dinner service in the Dining Room right next door, before getting seated in the Music Room for the show. 8pm ticket holders can also enjoy dinner, dessert or appetizers after the show, with Dining Room seating only guaranteed by submitting your table request before 8pm.
*PLEASE NOTE*
All performances are currently sold at 2/3 the normal audience capacity in order to maintain a certain level of social distancing, creating an even more intimate listening experience. Covid mandates are honored with *masks now optional* for all, and seating more distanced than our usual. As announced by the City of New Orleans, as of March 24th, Snug Harbor is no longer requiring valid proof of Covid vaccination or negative test for entry.
However, with our limited seating capacity, advance tickets are strongly suggested!