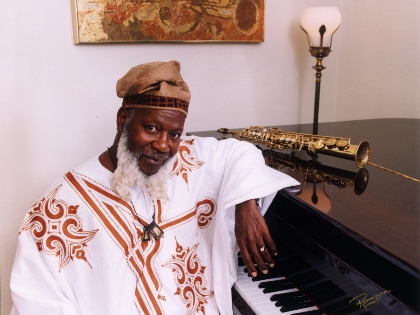 Join us tonight as we pay tribute to one of New Orleans’ most influential and beloved founding fathers of American Music, and proprietor of the first African-American musician-owned record label, Harold Battiste Jr, on his Birthday.

Battiste’s professional achievements as a producer and arranger for studio, film and television include Sam Cooke’s “You Send Me” and “A Change Is Gonna Come,” Sonny & Cher’s “I Got You Babe,” Lee Dorsey’s “Ya Ya,” and introducing audiences to Mac “Dr. John” Rebbenack, earning 6 Gold Records throughout his career. Among other firsts as a recording industry pioneer, Battiste notably launched the first African-American musician-owned record label, All For One (AFO Records), in 1961, which released music by his contemporary luminaries such as Ellis Marsalis Jr, Melvin Lastie, James Black, Alvin Batiste, Ed Blackwell, Alvin “Red” Tyler, Barbara George, and more.
As a graduate of of Dillard University’s music education program, Harold linked up with then-young Ellis Marsalis Jr. to form the American Jazz Quintet with Alvin Batiste, Ed Blackwell and Richard Payne. Then after many years spent working in the studio industry in Los Angeles and teaching at the Colburn School of Music, he returned to New Orleans to in 1989 to join the faculty of the newly formed Jazz Studies department at the University of New Orleans, created and helmed by Ellis Marsalis Jr.
During the last 25 years of his life, Harold Battiste Jr served on many arts and education organizational boards, won numerous awards, and mentored countless New Orleans musicians, many of whom you likely know today.
One of Battiste’s distinct mentees is violinist, pianist and educator Jesse McBride, a senior professor at Tulane University’s Jazz Studies department and current bandleader for Next Generation, a band started by Harold Battiste as an ongoing practice of bringing rising young musicians into the fold and often compared to Art Blakey’s Jazz Messengers. A graduate of the High School for the Performing and Visual Arts in Houston (alongside classmate Robert Glasper) and the University of New Orleans (under the direction of Ellis Marsalis Jr), McBride continues to bridge style gaps among generations from straight-ahead and contemporary jazz to funk and R&B.
Tonight, he presents the Jesse McBride Tribute to Harold Battiste Jr, featuring:
Jesse McBride – piano
Arnold Little III – guitar
Jason Stewart – bass
Jarrell Allen – drums
Rex Gregory – saxophones
Andrew Baham – trumpet
Shows at 8pm & 10pm.
Doors at 7:00pm & 9:30pm.
Restaurant is Open 6pm – 10pm for dinner before or after your showtime:
Advance Ticket Holders can now automatically make dinner table reservations in the Dining Room online via Open Table here!
Advance Ticket-Holders can also make table reservations for dinner by Emailing info@snugjazz.com after your tickets have been purchased online. All dinner table reservations must be attached to advance concert tickets. Dinner Service without Advance Concert Tickets is first-come, first-served based on availability upon arrival.
Full Bar is Open 6pm – Midnight for all, on show nights, with or without tickets.
Kind Reminder:  Snug Harbor does not serve food inside the Music Room. In order to preserve the integrity, quiet and focus of our world class intimate concerts, only cocktails and soft drinks are available for table service inside the Music Room. However, we encourage you to arrive 90 Minutes prior to your showtime in order to enjoy full, relaxing dinner service in the Dining Room right next door, before getting seated in the Music Room for the show. 8pm ticket holders can also enjoy dinner, dessert or appetizers after the show, with Dining Room seating only guaranteed by submitting your table request before 8pm.
*PLEASE NOTE*
As announced by the City of New Orleans, as of March 24th, Snug Harbor is no longer requiring valid proof of Covid vaccination or negative test for entry, and while masks are still suggested when not actively eating or drinking indoors, they are now optional for all. We are also now seating at just under our regular audience capacity.
However, with our intimate venue’s regularly limited seating capacity, advance tickets are still strongly suggested in order to guarantee seats for this special show!