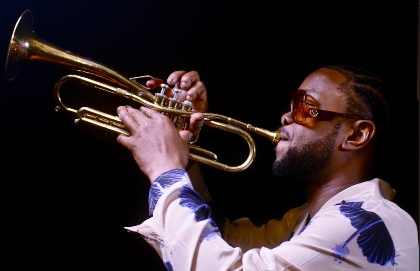 Trumpet sensation Maurice “Mobetta” Brown orbits simultaneously through three worlds: contemporary jazz, blues-rock and cutting-edge hip-hop. He is a mastermind as a trumpeter, composer, arranger, and producer. When Maurice picks up his horn, his soulful melodies soar into a rarefied space that uniquely marries be-bop to hip-hop and rock, producing his own distinctive sound.

The Chicago native won the national Miles Davis Trumpet Competition as a teenager, followed by a move to Louisiana to study under legendary clarinetist Alvin Batiste. His critically acclaimed 2004 debut album, HIP TO BOP, recorded in New Orleans, foreshadowed Brown’s unique talent for creating fresh bop-inflected jazz with an urban pulse. Unfortunately, Hurricane Katrina’s devastation forced Maurice to relocate, taking his horn to New York City where he established himself by recording with the likes of Aretha Franklin, Wyclef Jean, De La Soul, Macy Gray, Dr. Lonnie Smith, Lettuce, The Roots, and more.
His second album, 2009’s The Cycle of Love was named by NPR and the Huffington Post as one of the best records of the year. Brown was then invited to join the newly formed Tedeschi Trucks Band where he won a Grammy for his horn arrangements on the band’s debut album, Revelator. His trumpet was a wailing counterpoint to Derek Trucks’ searing guitar wizardry and became a staple of the TTB sound.
Brown’s immersion into hip-hop as musician/producer/lyricist culminated in the 2014 release of MAURICE vs. MOBETTA. This groundbreaking alter-ego album remixed The Cycle of Love with fresh and innovative hip-hop beats. Brown’s jazz roots were enhanced through the lens of a hip-hop perspective. Talib Kweli, Prodigy of Mobb Deep, Consequence and Jean Grae’s spitting rhymes are met by Mobetta’s own, while his trumpet circles effortlessly throughout every track.
He next left Tedeschi Trucks Band to reignite his solo career as a musician and producer, setting up a home in Los Angeles while performing internationally and producing album tracks for Talib Kweli, Prodigy, and British soul sensation Omar. After self-producing his first three albums, Maurice joined the Rope-A-Dope Records family, alongside contemporaries and fellow New Orleans suns like Christian aTunde Adjuah Scott, to release his fourth album THE MOOD, which mixed his instinctive jazz roots with soulful melodies and vocals, including the politically charged “Stand Up,” reflecting current events of 2017 with guest artist Kweli and Maurice trading vocals powered by his potent trumpet.
In 2018, Maurice joined Grammy award-winning superstar Anderson.Paak and The Free Nationals on their worldwide tours. He also performed on Ramsey Lewis and Kenny Garrett’s recent albums, while making his Broadway debut with Dave Chappelle along with Paak and bassist extraordinaire Thundercat. Brown then partnered with jazz megastar Kamasi Washington for his run of sold-out shows at Hollywood Bowl, Barclay’s Center and the New Orleans Jazz & Heritage Fest. Most recently, Maurice composed the horn arrangements on Grammy winning rapper Logic’s latest album. And has subsequently also appeared on the Tonight Show, Jimmy Kimmel Live, The Daily Show and The Colbert Show.
Maurice ended 2019 with a sold-out run at San Francisco’s Black Cat and began 2020 with a six-show residency at New York’s famed Blue Note jazz club, before the 2020-2021 pandemic shut down live performance. The Maurice “Mobetta” Brown sound has become mainstream as he charts his own musical course with constant evolution and crossover fluidity, coupled with an intuitive vision that lights a fire under traditional jazz, adds sonic brass to rock n’ roll, and creatively pushes the production envelope in hip-hop.
2022 finds Brown touring with multi-Grammy Award winning Anderson.Paak and Bruno Mars as Silk Sonic, including performances at the Grammy Awards and more.
Simply put, Maurice “MoBetta” Brown is one of the most dynamic and prolific trumpeters and arrangers in the music world today, period. Tonight, he returns to his second home, New Orleans, where he held a late night residency for several years here at Snug Harbor.
The Maurice Brown Band tonight features:
Maurice “MoBetta” Brown – trumpet
Derek Douget – saxophones (2nd set)
John Maestas – guitar
Oscar Rossignoli – piano
Amina Scott – bass
Alfred Jordan Jr – drums
+ Special Surprise Guests! +
Shows at 8pm & 10pm.
Doors at 7:00pm & 9:30pm.
Restaurant is Open 6pm – 10pm for dinner before or after your showtime.
Advance Ticket-Holders can also make table reservations for dinner by Emailing info@snugjazz.com or calling the club at 504-949-0696 between 2pm – 8pm, Thursday-Sunday, after your tickets have been purchased online. All dinner table reservations must be attached to advance concert tickets. Dinner Service without Advance Concert Tickets is first-come, first-served based on availability upon arrival.
Full Bar is Open 6pm – Midnight for all, on show nights, with or without tickets.
Kind Reminder:  Snug Harbor does not serve food inside the Music Room. As we are not what many regard as “dinner theater,” and in order to preserve the integrity, quiet and focus of our world class intimate concerts, only cocktails and soft drinks are available for table service inside the Music Room. However, we encourage you to arrive 90 Minutes prior to your showtime in order to enjoy full, relaxing dinner service in the Dining Room right next door, before getting seated in the Music Room for the show. 8pm ticket holders can also enjoy dinner, dessert or appetizers after the show, with Dining Room seating only guaranteed by submitting your table request before 8pm.
*PLEASE NOTE*
As announced by the City of New Orleans, as of March 24th, Snug Harbor is no longer requiring valid proof of Covid vaccination or negative test for entry, and while masks are still suggested while not eating or drinking indoors, they are now optional for all.
However, with our intimate venue’s regularly limited seating capacity, advance tickets are still strongly suggested, especially during Jazz Fest!  This show WILL sell-out.