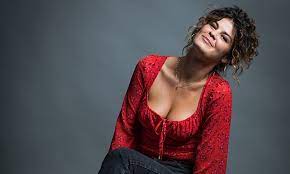 Vocalist-composer and master song interpreter Gabrielle Cavassa performs with clarity and command. An emerging talent out of New Orleans, the California-raised artist earned her position in the New Orleans Music scene by winning the the Sarah Vaughan Vocal Competition in 2021, after being named a finalist in 2018. She’s received spotlight recognition from JazzIz, OffBeat Magazine, WBGO’s “Singers Unlimited” and The Advocate for her artistry and live performances.

Lyrical intention and rhythmic curiosity nourish her expression. For her breadth of authenticity across a range of styles, Cavassa has garnered attention from critics and fellow artists, many of whom have become collaborators. She’s performed across the country and internationally with some of the music’s most creative voices, including Adonis Rose & The New Orleans Jazz Orchestra, Irvin Mayfield, Ashlin Parker and Jamison Ross. She’s shared the stage with such lauded artists as Cyrille Aimee, Quiana Lynell, Kermit Ruffins, and Shannon Powell.
A self-proclaimed disciple of influences as diverse as Billie Holiday, Amy Winehouse, Slum Village, and Italian opera, Cavassa cherishes her influences as a necessary piece of the creative process and of her own artistic identity. She became acquainted with the music at a young age, when she began collecting, cataloguing and “obsessively listening” to records before venturing out onto San Francisco’s live scene. Cavassa began working as a bartender at one of Oakland’s storied clubs — the very spot where she landed her first regular gig as a leader. Since that time, she’s appeared at intimate venues and on famed stages throughout the Bay Area from Club Deluxe to SFJAZZ.
As a result of her inclusive artistic nature, Cavassa enjoys tremendous freedom crafting her own music and lyrics that reflect different moments of impact throughout her life. Following a warm reception for her EP Three Jazz Love Songs, she celebrates the release of her self-titled debut record, co-produced by Ross. “Singing has always been a secret wonderland for me,” says Cavassa. “ I took a big leap in recording my own album,” The record includes largely original repertoire and a couple select standards she’s mined for intimate, personal connections over the years. She is currently in the studio working on her second record, due in late 2021.
She performs at many of the city’s iconic clubs and venues including The Starlight, tucked inside The French Quarter, as well as Snug Harbor and the Frenchmen Hotel, nestled into the renowned Frenchmen Street music strip. Through these intimate, spontaneity-fueled hits — many of them lasting well into the night — Cavassa has met and nurtured professional relationships with NOLA mainstays, as well as touring artists such as her friend, mentor and collaborator Jamison Ross.
Tonight, she presents her quartet, featuring:
Gabrielle Cavassa – vocals
Ryan Hanseler – piano
Lex Warshawsky – bass
Pedro Segundo – drums
*PLEASE NOTE:
All performances are currently sold at half the normal audience capacity in order to maintain safer social distancing, creating an even more intimate listening experience. Proof of covid vaccination or negative PCR test is required for entry. Due to the small, intimate size of our venue, masks are also still required for entry. With the limited seating, advance tickets online are strongly suggested! Walk-up tickets will be sold at the door only as seats remain available.
Doors Open at 7:30pm and 9:30pm for the 8:00pm and 10:00pm shows. Restaurant is open 6pm – 10pm for dinner before or after your show.
Bar is open 6pm – Midnight.