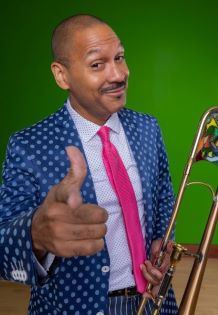 Delfeayo Marsalis is one of the top trombonists, composers, and producers in jazz today. Known for his “technical excellence, inventive mind and frequent touches of humor…” (Leonard Feather, Los Angeles Times), he is “…one of the best, most imaginative and musical of the trombonists of his generation.” (Philip Elwood, San Francisco Examiner.) In January 2011, Delfeayo and the Marsalis family (father Ellis and brothers Branford, Wynton, and Jason) earned the nation’s highest jazz honor – a National Endowment for the Arts Jazz Masters Award. Early influences included J.J. Johnson, Curtis Fuller, Al Grey, Tyree Glenn, Tommy Dorsey, and Ellington’s trombone masters. From the age of 17 until the present, he has produced over 100 recordings for major artists including Harry Connick, Jr, Spike Lee, Terence Blanchard, the Preservation Hall Jazz Band, and his father and brothers. Marsalis is an exceptional trombonist who has toured internationally with his own groups, as well as those led by five renowned bandleaders.