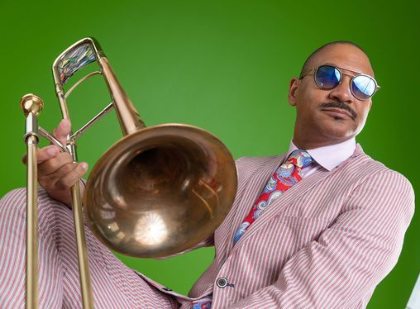 In January 2011, Delfeayo and the Marsalis family (father Ellis and brothers Branford, Wynton, and Jason) earned the nation’s highest jazz honor – a National Endowment for the Arts (NEA) Jazz Masters Award, thus dubbing them “America’s First Family of Jazz.” Delfeayo has proven himself an exceptional trombonist who has toured internationally with his own groups, as well as those led by five renowned bandleaders.

Advance Ticket-Holders can also make table reservations for dinner by Emailing info@snugjazz.com after your tickets have been purchased online. All dinner table reservations must be attached to advance concert tickets. Dinner Service without Advance Concert Tickets is first-come, first-served based on availability upon arrival.

Full Bar is Open 6pm – Midnight for all, on show nights, with out without tickets.

Kind Reminder: Snug Harbor does not serve food inside the Music Room. In order to preserve the integrity, quiet and focus of our world class intimate concerts, only cocktails and soft drinks are available for table service inside the Music Room. However, we encourage you to arrive 90 Minutes prior to your showtime in order to enjoy full, relaxing dinner service in the Dining Room right next door, before getting seated in the Music Room for the show.

As announced by the City of New Orleans, as of March 24th, Snug Harbor is no longer requiring valid proof of Covid vaccination or negative test for entry, and while masks are still suggested when not actively eating or drinking indoors, they are now optional for all.

However, with our intimate venue’s regularly limited seating capacity, advance tickets are still strongly suggested in order to guarantee seats!  This show WILL sell-out.