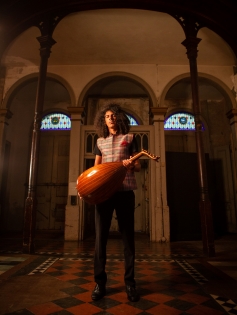 Mahmoud “Mood” Chouki (Morocco, 1984) is a master guitarist, multi-instrumentalist and composer currently living and working in New Orleans. His art draws together music from several different international contexts to explore how music may speak across cultural divides. His own compositions incorporate musical influences from across the globe, ranging from European classical, Andalusian from Southern Spain, Levantine music from the Middle East, Maghrebian music from North Africa, Latin American music, and Jazz from the United States. Integrating sounds and rhythms from many different cultures, Chouki combines classical guitar with instruments such as the loutar, a traditional instrument of the Middle Atlas region of Morocco; the sintir, a Sub-Saharan instrument from the Sahel region (Mali); the oud, an oriental lute; the Algerian mandole, a steel-string fretted instrument resembling an elongated mandolin; the Bağlama saz, a Turkish long necked bowl-lute; the banjo, and a variety of percussion instruments.

From the age of eight, Chouki trained at the Conservatory of Larache in northern Morocco and continued on at the National Conservatory in Rabat, with a focus in music theory and classical guitar. At the age of eighteen, he won first prize in the International Guitar Competition in St. Esteban del Puerto, Spain. Soon after graduating, Chouki embarked on a journey throughout Morocco with a keen interest in traditional instruments of the Maghreb and Africa.
Chouki’s projects have led him to perform around the world, such as the Magic Lutes Concerts with composer Hughes de Courson and the Symphonic Orchestras in Qatar; Magic Lutes Concerts with composer Hughes de Courson and the Symphonic Orchestras in Bahrain; Pireneos Sur Festival in Sallent de Gallego, Spain; Snug Harbor in New Orleans, USA; Cafe de la Danse, Paris, France; Gwangju world music festival, South Korea; and Safar music series at the New Orleans Museum of Art.
As artistic director of Rencontre Orient-Occident at Chateau Mercier in Sierre, Switzerland, Chouki organizes annual artist residencies, bringing together master musicians from the East and West. For one week they share and explore each other’s styles and cultures through music and experiences, which culminates in a final concert. He also currently teaches music at the Lycee Francais de la Nouvelle Orléans, and is Music Curator for monthly music programs at the New Orleans Museum of Art. Most recently Chouki composed the film score for the2021 Sundance award winning film, Ma Belle, My Beauty (directed by New Orleans based filmmaker Marion Hill). In 2021, he was awarded 2020’s “Best Emerging Artist” by Offbeat Magazine’s Best of the Beat Awards.