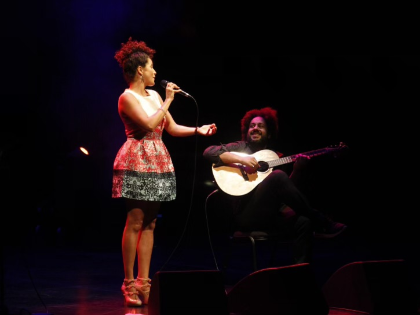 Improvisation is not just a technique for vocalist Cyrille Aimée, it is a way of life, her infinite artistic style. She has ventured from singing on street corners in Europe to dazzling audiences at some of the world’s most prestigious jazz festivals; from sneaking out to sing in gypsy encampments in her native France to acting on Broadway and winning over the notoriously tough audiences at New York’s Apollo Theater. At the famed Montreux Jazz Festival in 2007, Aimée entered and won the vocal competition, recording her debut album with the prize money. It was the first of many such accolades to come, including winning the Sarah Vaughan International Jazz Vocal Competition and becoming a finalist in the Thelonious Monk Jazz Vocal Competition. Next, Aimée met Stephen Sondheim after performing his material in a tribute concert at New York’s City Center. He told her she made him cry — quite a feat, given that she was fairly new to his music at the time. Now her latest album “Move On: A Sondheim Adventure” on Mack Avenue Records is considered the acclaimed French/Dominican vocalist’s best album yet. Now based in New Orleans, Aimée has several working projects, a local band, and forthcoming new releases.
Diego Figueiredo is a new star of the guitar world. At only 39 he has already released 26 albums, 3 DVDs, and has played in more than 60 countries around the world. As a two-time winner of the esteemed Montreux Jazz Competition, and others, George Benson has remarked that “Diego Figueiredo is one of the greatest guitarists I’ve seen in my whole life. The world needs to listen to his music.” Born in Franca, Brasil, he began playing guitar and mandolin at age 4 and 6, and electric guitar at age 12. By his teens, he was playing music clubs, pubs and street festivals around his native Brasil. Since, he has played with greats such as Gilberto Gil, João Bosco, Robeto Menesco, Toquinho, Janis Siegel, and more. Diego is currently touring his concert, “From the Classical to the Jazz,” which is a fusion jazz, bossa nova and classical music. Tonight, he makes his Snug Harbor debut on his New Orleans tour stop.
Pedro Segundo is the embodiment of dynamism. Equally at home behind 18th century style kettle drums as well as a modern five-piece drum kit, Pedro makes every object he touches a channel for his incredible musical energy. He grew up in Portugal and was reared on an eclectic blend of gospel, classical, swing and world music. All of these genres have spurred him onto his truly unique approach to percussion. In 2010, he became the house drummer of Ronnie Scott’s Jazz Club in London, UK whilst finishing his timpani and classical percussion degree at Guildhall School of Music and Drama.
Segundo has performed around the world with artists such as the Academy of Saint Martin in the Fields as guest timpanist with Sir Neville Marriner, Murray Perahia, and Joshua Bell, and more recently with Judith Owen, Dennis Rollins, Cyrille Aimée, as well as Chineke! Orchestra at the BBC Proms 2021. Locally, while he prepares for his debut with the Louisiana Philharmonic in 2022, you can catch Pedro’s work at NOMA as part of Dawn DeDeaux’s retrospective, weekly gigs at the Pontchartrain Hotel or the Royal Frenchman Hotel.
This is a very special One-Night-Only concert!
Shows at 8pm & 10pm.
Doors at 7:00pm & 9:30pm.
Restaurant Open 6pm – 10pm for dinner before or after your showtime.
Advance ticket-holders can make table reservations for dinner by Emailing info@snugjazz.com or calling the club at 504-949-0696 between 2pm – 8pm, after tickets have been purchased online. Full Bar Open 6pm – Midnight.
*PLEASE NOTE*
All performances are sold at half the normal audience capacity, creating an even more intimate listening experience. Covid mandates will be honored with masks required for all and seating more distanced than our usual. Please be prepared to present a valid proof of Covid vaccination or negative PCR test dated within the past 3 days with matching Photo ID for entry. No ticket refunds due to lack of Covid prevention preparation. With the limited seating capacity, it is advised that you get your tickets early!