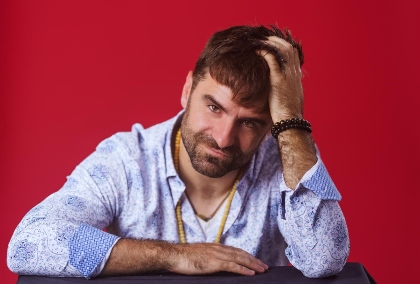 Brad Walker is one of the most active and sought-after saxophonists in the city of New Orleans today. Perhaps best known for his “soaring” (Rolling Stone), “energetic” (NPR), and “tasteful” (Relix) solos on Saturday Night Live, the 2017 Grammy Awards, and The Tonight Show with Nashville mega-star Sturgill Simpson, Walker is a compelling artist in his own right, with six full-length releases under his own name and over a decade of music-making in the Crescent City under his belt.

His 2014 debut, “Quintet,” received a 4-Star review in DownBeat magazine, and his playing has received praise in the Times-Picayune, Variety, OffBeat Magazine, Gambit Weekly, and many other publications. In 2020, Walker was nominated for two ‘Best of the Beat’ Awards by OffBeat Magazine, in the ‘Contemporary Jazz’ category as ‘Best Artist’ and for ‘Best Record’ (for “Live at Snug Harbor”), alongside such international stars as Nicholas Payton, Jon Batiste, Herlin Riley, Christian Scott, and Terence Blanchard. He was also nominated for the ‘Big Easy Awards’ by Gambit Weekly as ‘Best Contemporary Jazz Artist.’ These two award ceremonies are considered the pinnacle of achievement in the New Orleans music community. He was again nominated as ‘Best Saxophonist’ and ‘Best Contemporary Jazz Artist’ by OffBeat in 2021, as well as receiving a nomination for ‘Best Contemporary Jazz Album’ for “The Dockside Sessions.”
Since 2009 Walker has performed or recorded with such luminaries as Bernard Purdie, Peter Erskine, John Riley, George Porter, Jr., Anders Osborne, Ivan Neville & Dumpstaphunk, Marcia Ball, Rickie Lee Jones, Valerie June, Alex Ebert, Better Than Ezra, U2 (w/Hal Willner), Zigaboo Modeliste, and countless others. He has led the horn sections for Blues Award-winner Ana Popovic and OffBeat Award winners Eric Lindell, Johnny Sketch and the Dirty Notes, Honey Island Swamp Band, and Colin Lake. Since 2016, he has worked with New Orleans native PJ Morton, recording on multiple Grammy Award-winning and -nominated records, and performing on The Today Show, BET Gospel Super Bowl, and other national programs.
Brad holds a Bachelor of Music degree in classical saxophone performance (2006) and Master of Music degree in jazz studies (2011), both from Louisiana State University (LSU).
Tonight, he presents the Brad Walker Quartet, featuring:
Brad Walker – saxophones
Sam Kuslan – piano
Matt Booth – bass
Alfred Jordan Jr – drums
Shows at 8pm & 10pm.
Doors at 7:00pm & 9:30pm.
Restaurant is Open 6pm – 10pm for dinner before or after your showtime:
Advance Ticket Holders can now automatically make dinner table reservations in the Dining Room online via Open Table here!
Advance Ticket-Holders can also make table reservations for dinner by Emailing info@snugjazz.com after your tickets have been purchased online. All dinner table reservations must be attached to advance concert tickets. Dinner Service without advance concert tickets is first-come, first-served based on availability upon arrival.
Full Bar is Open 6pm – Midnight for all, on show nights, with or without tickets.
Kind Reminder:  Snug Harbor does not serve food inside the Music Room. In order to preserve the integrity, quiet and focus of our world class intimate concerts, only cocktails and soft drinks are available for table service inside the Music Room. However, we encourage you to arrive 90 Minutes prior to your showtime in order to enjoy full, relaxing dinner service in the Dining Room right next door, before getting seated in the Music Room for the show. 8pm ticket holders can also enjoy dinner, dessert or appetizers after the show, with Dining Room seating only guaranteed by submitting your table request before 8pm.
*PLEASE NOTE*
As announced by the City of New Orleans, as of March 24th, Snug Harbor is no longer requiring valid proof of Covid vaccination or negative test for entry, and while masks are still suggested when not actively eating or drinking indoors, they are now optional for all. We are now seating at just under our regular audience capacity.
However, with our intimate venue’s regularly limited seating capacity, advance tickets are still strongly suggested in order to guarantee seats for this acclaimed show.